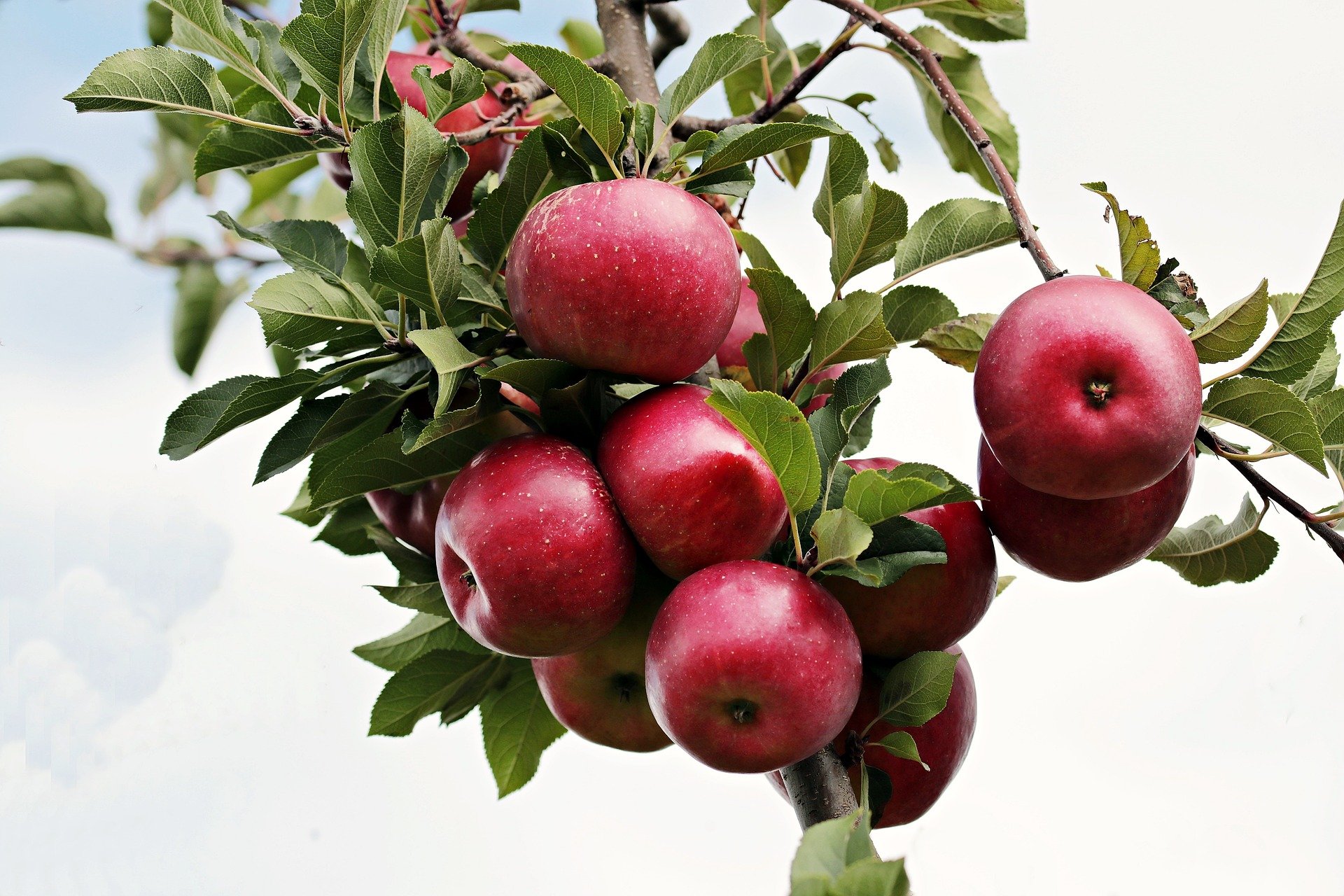 PREVENTION is the first step in the successful cultivation of fruit trees.  Before we discuss growing season preventative measures, let’s first turn our attention to dormant season spraying.  There are two opportunities to apply insect and disease control while plants are dormant… in November and again in March.  Why both?  Because, no matter how thoroughly we spray, we rarely smother out all our insect and disease problems the first time around.

Dormant season control of many insects and diseases starts with the correct applications of the right materials applied at the right time.  Apply when temps are 40-50 degrees.  When spraying in March, be sure no green leaf tissue is showing to avoid oil injury.  Check each label for dilution rate… oil in particular is applied at a heavier winter rate.

Horticultural oil is considered one of the most effective controls for insects in all stages of growth… you must be thorough when applying this, as it works by smothering the insect.  If insects were the only issue, then oil alone will provide the control you need.  If diseases were also present, mixing in either form of copper will give additional protection for the next growing season.

Per gallon of water, add the recommended amount of oil and copper.  As mentioned above, be thorough… spray trunks, branches, and soil beneath to smother insects and disease spores.  If preferred, convenient hose-end sprayers, pre-filled with either oil or copper, can be used separately. Apply All Seasons Oil (this has pretty much done its job by the time it dries)… in a day or two, follow up with an application of copper

(Liqui-Cop is available in a hose-end sprayer.)

The most critical growing season controls must be applied EARLY… We carry several sprays for fruits but usually recommend Bonide’s Fruit Tree Spray, a combination of natural pyrethrin (insecticide) and sulfur (a natural fungicide).

Many insect and disease problems begin very early in the growing season, so timing is everything when we talk about prevention.  Your spring applications of fruit tree spray should occur as follows…

2. At pink bud stage: flower buds are tight, flushed with

5. If necessary, 2-3 more applications during the growing  a close watch will alert you to the necessity of any further applications.

Recommendations for specific issues… those which respond to dormant season controls, early growing season, or other preventative techniques…

Peach Leaf Curl… Liqui-Cop in March and November, at the heavier dormant season rate.  In addition, spray in late September/ early October, before leaf drop.  Keep the area free of dropped foliage, as spores will drop off into the soil, increasing the chance of reinfection next year.  Do NOT compost such foliage… discard or burn.

Cedar Apple Rust (Gymnosporangium juniperi-virginiana)… an alternate host disease.  Rarely affecting our native red cedar (Juniper virginiana), the cycle begins here.  Galls begin as small, green swellings.  The next season, they mature into orange gelatinous galls with finger-like protuberances produced during the wet spring, taking over 20 months to complete the juniper phase.  Spores infect apples and crabapples, located within a few hundred yards, with some posing a problem from as far as one mile away.  It is said that apples planted within six miles of Junipers are at risk!

Remain vigilant, removing any visible galls from your juniper as they appear.  Plant apples and crabapples designated as rust resistant.  Keep any fallen leaves picked up and do NOT compost!  Spray schedule as follows…  Liqui-Cop in March and November, at the heavier dormant season rate.  In addition, spray with Liqui-Cop in late September/ early October, before leaf drop.  Follow steps 1-5, as outlined earlier, for the next growing season.

Black Knot (Dibotryon morbosum/Apiosporina morbosa)  Flowering or fruiting cherries and plums present with corky black galls on twigs and branches…these are the most widely affected specimens.  Occasionally, pears and apples are infected as well (same family).  During rainy periods, April through June, infective ascospores are spread by splashing rain, blown by the wind from nearby diseased trees (usually wild cherries), or spread on the feet of birds (they pick up spores from an infected wild cherry, etc. and inoculate your tree with the spores).

Swellings first appear on branches in autumn.  The following spring the greenish knots (ready to spore) have begun to split, throwing out asexual spores (considered relatively unimportant in the overall cycle), and by fall they have turned black and hard.  Once a gall completely encircles a branch, it stops growing, having killed the branch.  Swollen black cankers are 1-6” or more in length, and it is the sexual spores which these produce that are most virulent as they begin to disperse in spring.  If only a portion of the branch is affected, that black knot gall will continue expanding, producing and throwing spores in successive spring seasons.

What to do?  While dormant (until April 1st),  cut 4” below each gall, burning or burying prunings to avoid further spread… do NOT compost!  Sterilize your pruner blades, or other cutting tools, in between each cut with a 10% bleach solution or isopropyl alcohol.  (Remember to oil them afterward, as they will be dried out completely from dipping.)  Using a 10% bleach solution or isopropyl alcohol, wipe down all the pruning wounds.  Allow wound to dry for a day or two, then apply copper (Liquid-Cop is best) as a spray.

Unfortunately, a severe case may necessitate removal of the tree.  In other cases, continuous monitoring, removal of affected branches, and cutting out any large galls in the dormant seasons (followed by dressing/treating wounds) is the action needed.  You may want to dress wounds with Phytech 50,, to further protect against reinfection.

Plant resistant plum and cherry varieties.  Cut down and remove nearby infected host plants.  You may want to try a preventative spray program… Starting at spring bud break, apply one of the following fungicides every two weeks (particularly in rainy periods), until new growth has ceased.  Copper (Liqui-Cop, BordeauxMix, Copper Soap), Sulfur, Mancozeb, Captan, or Fungonil may slow the progression.  No guarantees, but some have found limited efficacy with such a program.

The right foods help with disease resistance… During the growing season, foliar applications of Neptune’s Harvest Fish & Seaweed Fertilizer will help with heat, cold, and drought tolerance.  Kelp is valuable in keeping disease at bay, building up a plant’s natural resistance.  Apply every 7-10 days.  It is particularly useful in controlling Peach Leaf Curl, once diagnosed.  Diseased foliage will drop (discard these/do NOT compost) and new, healthy foliage will replace it.  Keep up the liquid kelp program and leaves should stay symptom-free… this also lessens the chance of fruit beaming infected.

Whether or not you provide the above liquid foliar feedings, a yearly application of organic granular fertilizer is recommended…either April or October is ideal.  A basic program would combine Espoma Tree-tone and rock phosphate.  The former is a complete balanced fertilizer…the latter is a great supplement that enhances bloom, and, consequently, fruit production.  Apply Tree-tone at 1# per inch of trunk caliper (trunk diameter at 3’ from ground).  Rock phosphate is 1/2# per inch of caliper.  For trees in lawn, deliver into a series of 3-4” deep holes at the dripline.  The ultimate feeding would include greensand and kelp meal as well.  Note: if tree is located within an edged bed, scatter the appropriate quantities at the dripline…till in lightly and water.

OTHER: protect young trunks from rodents and sun scald in winter with perforated vinyl trunk guards.  Any pruning is best done in winter..wounds heal quickly, no wound paste needed, no insect or disease mitigation needed, easier to see the overall outline.